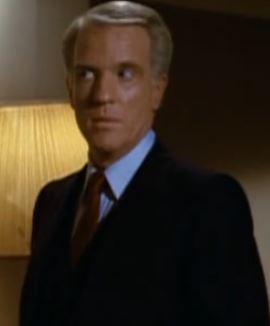 Yuri Semenenko was a Russian spy who assumed the name Eric Simpson to get a job at Technitron; a company with a number of defense contracts. He began obtaining classified files when his spying was discovered by Rose Blake; a file clerk at the company and Rhonda's mother. He hired a couple of thugs to kidnap Rose who told him and his handler; "John Smith" that she sent out a letter with incriminating information out in order to avoid being killed. He sent his thugs to look for it. Rhonda contacted Ralph for help and together with Bill he found the thugs who led them to the house where Rose was being held. Ralph, Bill, and Pam found Simpson on the beach with other spies who were being picked up by a submarine. Ralph wrecked the sub and captired the men who Bill arrested. (Reseda Rose)

Abilities: As an employee of Technitron and a spy it can be assume that Simpson has training in business or technology as as espionage.

Retrieved from "https://thegreatestamericanhero.fandom.com/wiki/Eric_Simpson?oldid=220"
Community content is available under CC-BY-SA unless otherwise noted.