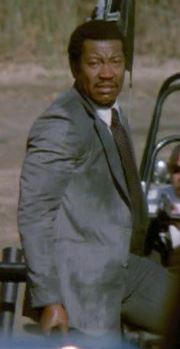 John Mackie is Bill’s partner in the FBI. He is first seen being chase by members of Gabrielle’s Army for unknown reasons. The ATV he was driving crashed in to a pond and he was then surrounded by them. He tried to escape but was chased down. He is next seen when Ralph and Bill encounter the spaceship. He talks to them through the car radio. He then beams down and walks over to them. He reveals that he had been shot and killed several hours before hand. The aliens brought him back to some form of life and he states that he is going to go with them. John puts the package containing the suit in Bill’s truck and is then beamed back abroad the ship.

John most likely received basic FBI training. In his revived stated he was able to open Bill’s trunk by placing his hand on the lock.

Retrieved from "https://thegreatestamericanhero.fandom.com/wiki/John_Mackie?oldid=330"
Community content is available under CC-BY-SA unless otherwise noted.