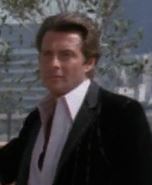 Also known as: The Dancer, The Disco Prince

Johnny Damanti was one of the biggest drug dealers in the country and Bill had been after him for about 15 years. Suddenly Scarlet Wild; Johnny's girlfriend claimed to want to testify against him because he broke up with her. SHe demanded that Bill be the one to take her to LA to tesfy before the grand jury and that she couldn't fly because of superstition. After numberous attacks that left Bill injured it was revealed that Scarlet's willingness to tesify was just a ruse to get at Bill. After the hit men his underling; Mike, had sent had been arrested he and Mike went down to LA from Sna Francisco to take of the job themselves. After they attacked Whitney High School in the armoured hit car they were defeated and captured by Ralph and Bill. (The Hit Car)

Abilities: Despite his numerous criminal activities Damanti had managed to prostition himself within the wealthy and powerful of society to the point where he ahd been invited to the Grammys.

Retrieved from "https://thegreatestamericanhero.fandom.com/wiki/Johnny_Damanti?oldid=289"
Community content is available under CC-BY-SA unless otherwise noted.