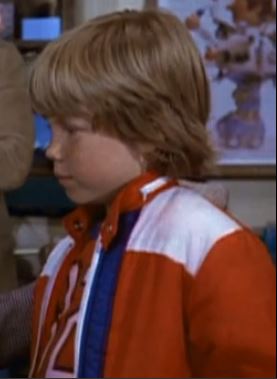 As known as: Hotshot

Kevin is the young son of Ralph Hinkley and Alicia.

Kevin spotted Ralph wearing a cape but Ralph denied it was such. (Pilot). His mother was once supposed to take him to a amusement park as part of their weekend together but at the last minute she got a call from her agent about a TV commercial so Pam took him instead. (Reseda Rose) He is seen playing chess with Pam, who informs Ralph that the next day Kevin wants to go to an appearance by John Hart, an actor who portrayed the Lone Ranger, who was Ralph’s childhood hero and from whom Kevin got autographed photos for himself and his dad. (My Heroes Have Always Been Cowboys) He is seen playing with a train set while Tony, who is on the run at the time, sits by him. (Fireman)

Early in the series his parents were involve in a custody dispute over him. The end result is unknown because he only appears in a few episodes.

Bill calls him Hotshot but he doesn’t like it.

Retrieved from "https://thegreatestamericanhero.fandom.com/wiki/Kevin_Hinkley?oldid=589"
Community content is available under CC-BY-SA unless otherwise noted.