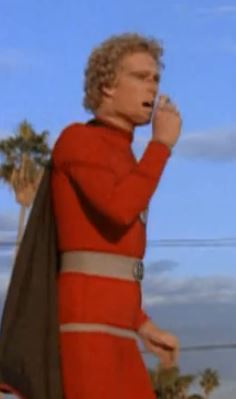 Ralph Hinkley is a teacher at Whitney High School and the main protagonist of The Greatest American Hero. He is also first Pamela Davidson's boyfriend, and then her husband. Ralph teaches a class of special education "problem students," whom he takes on a field trip out into the desert (for some reason.) He meets FBI agent Bill Maxwell at a diner, where Bill has an almost violent altercation with Tony Villicana, one of Ralph's students. Before Ralph and his students get to their destination, the bus breaks down. Going for help he again runs into Bill whose car also stops working. They then encounter an alien ship and the “little green guys” give Ralph a box containing the suit and a book of instructions. They then instruct Ralph and Bill to work together to make the world a better place (On the last episode (Vanity, Says the Preacher), it is discovered that the aliens do this because Earth is one of the universe's last "green planets" and they want to save it. Unfortunately he loses the instruction booklet on the way back to the bus and must figure out how to use the suit by trial and error. While he does so he uses it to fight evil along side Bill and Pamela.

Abilities: Ralph is a gifted teacher. He is also the only one who can use the suit. When he wears it gives him many powers. He is extremely strong (he was able to easily lift cars, and was almost strong enough to lift a space-shuttle), fast (one villain estimates that he can run at about "70 miles per hour", and in the air he outran a mach 6 jet, putting his top speed at about 4,600 MPH when flying), and durable (he has survived countless explosions and bullet hits, and he tanked a rocket launcher hit with no damage whatsoever, but a time bomb and a direct shot to the head with a freight train have knocked him unconscious, although no real damage was dealt). He can fly, although he needs a running start, and isn't very good at it. He can turn invisible, and use telekinesis (his telekinesis was strong enough to stop a car at full speed). He can also apparently inhale large amounts of gas (even tear gas), breathe underwater, is completely fireproof, and can telepathically communicate with animals. He can see the current condition of anyone by touching something with their "vibes" on it (really just anything they touch a lot), see the future, and later in the series other people were able to see these visions by touching him (apparently, people in the future can see him when he has a vision of the future).

Did magic tricks when he was younger (The Resurrection of Carlini)

Fan of the Lone Ranger (My Heroes Have Always Been Cowboys)

Can hotwire a jeep (A Chicken In Every Plot)

Retrieved from "https://thegreatestamericanhero.fandom.com/wiki/Ralph_Hinkley?oldid=657"
Community content is available under CC-BY-SA unless otherwise noted.