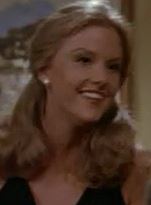 Scarlet wild was a showgirl who was dating Johnny " the Dancer" Damanti; a drug dealer who Bill had been after for years. He supposely dumped her driving her to testify in front of a grand jury. While she asked for Bill to be the one to escort her to LA the FBI sent another agent instead. Damanti sent a his armoured hit car after them and the agent was shot. Bill was called in and he and Ralph went to San Francisco to pick her up. She refused to get on a plane claiming that her astronomist warned her against it. She, Bill, and Ralph drove back to LA with a pair of hit men coming after them leading to multiple encounters that left Bill repeatedly injured. Throughout the appearence she repeatedly hit on Ralph much to Pam's annoyance. After getting in front of the grand jury she invoked her fith amendment right, refusing to testify. Ralph guessed that the whole experience was an attempt to try to kill Bill which was confirmed when Scarlet was seen eating with Damanti at a resturant. Bill goaded Damanti to come after him which he did leading to his defeat and arrest by Bill and Ralph. (The Hit Car)

She once appeared in People magazine.

Retrieved from "https://thegreatestamericanhero.fandom.com/wiki/Scarlet_Wild?oldid=285"
Community content is available under CC-BY-SA unless otherwise noted.